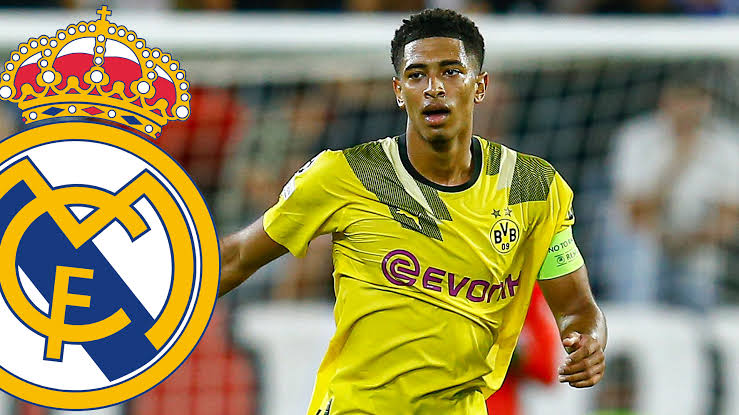 In-demand Borussia Dortmund midfielder Jude Bellingham is reportedly pining for a move to Real Madrid in 2023.

The 19-year-old is expected to be at the centre of an intense transfer tussle next year, with Dortmund seemingly facing a losing battle to retain his services.

Bellingham is thought to be on the radar of numerous top clubs, with Liverpool, Chelsea, Manchester United and Manchester City among them.

Liverpool have long been considered one of the frontrunners to sign the England international, and a recent report claimed that the Reds were hopeful of wrapping up a deal as early as January.

However, Real Madrid are also at the head of the queue for Bellingham's signature, and Sport claims that the midfielder has his heart set on a switch to the Bernabeu.

While Los Blancos have therefore been handed an advantage in the race for Bellingham, whether the club would bow to Dortmund's wage demands is another question entirely.

With Bellingham under contract at the Westfalenstadion until the summer of 2025, Edin Terzic's side are under no pressure to sell for a cut-price fee and could demand up to €150m (£130.5m) to sanction a sale.

The report adds that Real Madrid are not prepared to match Dortmund's price tag, although Liverpool are supposedly optimistic about doing business closer to the €100m (£87m) mark.

It is believed that the Reds have spent time forging a strong relationship with Bellingham's entourage, but the player himself holds a strong desire to represent the Spanish champions.

Dortmund have apparently not given up hope of keeping Bellingham beyond the summer of 2023, but CEO Hans-Joachim Watzke has conceded that a mammoth bid from a top European club would be too difficult to pass up.

Ofline
I'd love to have him at United but highly doubt we'd be able to pull that move. So wouldn't really mind him going to Spain.
Reactions: MartinGee and CuteJean

Varlot said:
I'd love to have him at United but highly doubt we'd be able to pull that move. So wouldn't really mind him going to Spain.
Click to expand...

If he doesn't end up at Madrid, then it's either Liverpool or Manchester City

CuteJean said:
If he doesn't end up at Madrid, then it's either Liverpool or Manchester City
Click to expand...

Exactly! I don't root for the strong becoming even stronger hehe
Reactions: MartinGee and Bobby

Varlot said:
Exactly! I don't root for the strong becoming even stronger hehe
Click to expand...

Right Now, Bellingham is the beautiful bride, so it's only logical he joins the stronger teams.

Bobby said:
Right Now, Bellingham is the beautiful bride, so it's only logical he joins the stronger teams.
Click to expand...

I wouldn't want him to move to Real, their already have

Camavinga
Valvede
Tchouameni
All best young midfielders, adding Bellingham to their ranks would be insane

Reactions: MartinGee
You must log in or register to reply here.