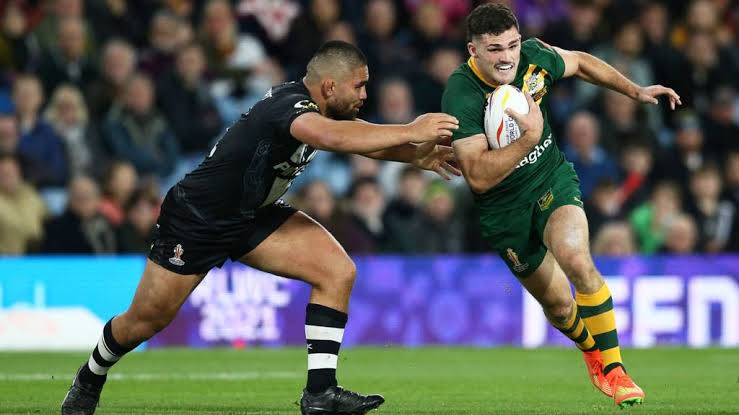 Australia have booked their place in a 13th successive Rugby League World Cup final courtesy of a thrilling 16-14 victory over New Zealand at Elland Road this evening.

The Trans-Tasman rivals played out an all-time classic in the first semi-final of the competition, with New Zealand coming within a whisker of ending Australia's long-standing dominance at the World Cup.

The Kangaroos, who have not lost a World Cup game since the 2008 final against New Zealand, fell behind early on and were on the back foot for much of the first half as the Kiwis threatened to pull off a famous victory.

Indeed, New Zealand went into the interval with a 14-10 advantage courtesy of tries from Jahrome Hughes and Dylan Brown, as well as a penalty and two conversions from the boot of Jordan Rapana.

Australia levelled things up through Josh Addo-Carr's stunning try in the 16th minute, and took the lead when Valentine Holmes went over 10 minutes before half time.

Brown's try shortly before the break then put New Zealand back in front, but Cameron Murray's score after 53 minutes - and Nathan Cleary's subsequent conversion - proved to be the difference-maker as neither side could add to the scores beyond that.

There were a number of flashpoints throughout a fiercely-contested second half, and New Zealand almost won it when Peta Hiku saw a try disallowed having leapt back into play and touched the ball down with an acrobatic finish.

However, they were forced to settle for an agonisingly narrow defeat against their bitter rivals as Australia held on for the two-point victory, booking their place in November 19 final at Old Trafford in the process.

The Kangaroos will face either hosts England or Samoa in the final, with that second semi-final taking place at the Emirates Stadium on Saturday.

Australia have won 11 of the past 15 editions of the Rugby League World Cup, including eight of the last nine, while the only time they have failed to reach the final of the competition was the inaugural one in 1954.
You must log in or register to reply here.